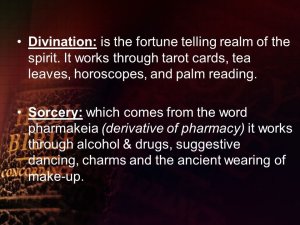 Greed and manipulation sounds very much like the tactics of the Pentecostal Church. The ministers live like millionaires while their parishioners are middle-class or poor. What is wrong with this picture?

Did you know the devil can twist scripture? 2nd Corinthians 11:13-15 speaks on the devil being an angel of Light and that he can transform his ministers in that very same way. In Scripture A Vision from the Lord must match up with something already in the Bible. A vision cannot contradict the word of God and Fatima contradicts everything on the Bible especially of the New Testament. Thus the vision was not of God but rather of Satan. The doctrine of Mary is a progressional one in that the Rosary did not appear on the scene until the late 10th century. Wicca would state that the Rosary is similar to a talisman. I have a video for you called Fatima and Mary which most Roman Catholics would swear to but it makes Mary someone to be worshipped. Catholics need our prayers so that perhaps God will grant them repentance to escape the snare of the devil having been taken captive of the devil to do the will of Satan.

I have an interesting article for you today about Roman Catholics and WICCA. https://wwrn.org/articles/34954/ 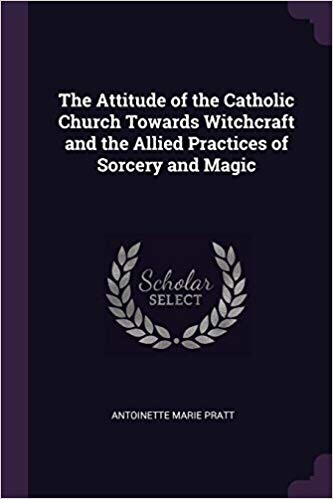 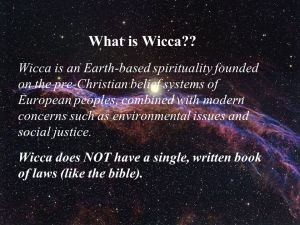 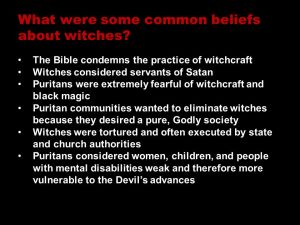 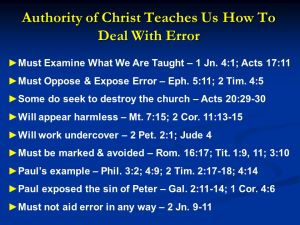 I will have more on Wicca soon and even a dose or two of witchcraft. Stay tuned! 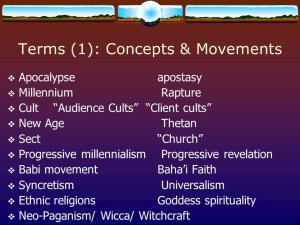 There are new religious movements coming almost every week from all over the world each with their own perspective. It’s very annoying. 1st Corinthians 15:1-4 provides the believer with the gospel that saves so why do we need all these artificial means? Body Thetans belongs to Scientology, Wiccans, and the New Age Movement and I’m not sure who or what they belong? These kinds of groups add nothing to the body of Christ. When you were younger do you recall the concept of cooties? That’s what Body Thetans are and if you want to know more about them check out our category Scientology. In schools today the Bible is outlawed but you can find a book about Wiccans casting spells. The world has gone topsy-turvy. What’s next? You’ll find out soon.

In Hebrew Abracadabra means about just what the Pentecostals believe. Amazing! But I can already hear the Pentecostals say, exposing Christian error only says that the Hebrew means that. Really? 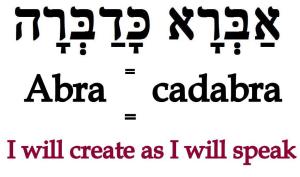 Is that Hebrew enough for you? So Abracadabra Church is exactly the same thing as the Pentecostal Church. They both use a magical word to speak words into existence. Isn’t that what Wiccan do when they cast a spell? They also speak things into existence. Wow! Pentecostal/ Wiccan point of contact connection!

Pentecostal churches believe in magic. They are part of the Abracadabra movement. Proof positive!

Pope Francis has signaled that he is on the path to allowing the worship of spirits which would open a Pandora’s box of troubles for his church. This is due to the lack of priests in the Amazon. If that were to happen Native Americans and Voodoo could aligning w themselves with Rome, perhaps even WICCA? That decision would certainly open the door wide open to Satan. Not to mention the abracadabra element already in place.  How Pope Francis is going to handle this bears watching.

Better take Gods word on this one if you want to get home for dinner on time.

I love this one because it’s absolutely true. Jesus is the only way. 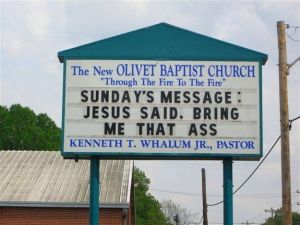 The only question is on which ass the Lord is talking about?

This sign also speaks the truth. Dairy Queen can wait till services are over. 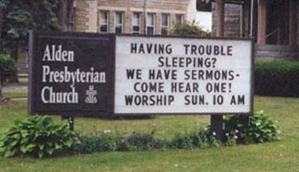 A Zombie story? I  knew the Catholics were associated with WICCA!

Replacing the iconic design of the Crystal Cathedral under the tenure of Dr, Robert Schuller

is a dark entity that makes you feel as though you were entombed in bubble wrap.  One used to be able to see through all those windows but no longer.

When you enter the main door of Christ Cathedral you are greeted by the visage of Satan. Much of the redone Cathedral, at the cost of 72 Million dollars, is dark and foreboding. There is The all seeing eye of Freemasonry on the altar and artwork close 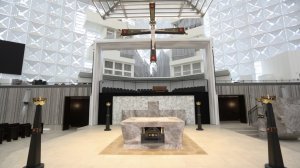 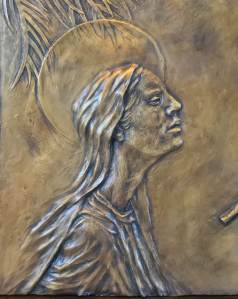 Mary is displayed. Hardly flattering with the long neck. What could have been a living testimony to Jesus Christ is dark and unpleasant. Why?

The Orange County Diocese could have made this much lighter in scope. Perhaps the 72 Million might have been put to greater use as to feed the poor? 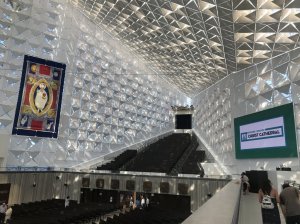 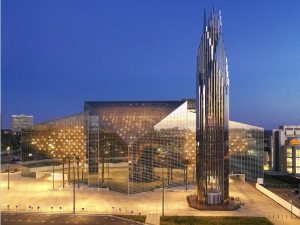 The golden thread represents new thoughts connections between east and west. On one hand you have a vague notion of Christianity and on the other hand Eastern religion including mysticism. The golden thread weaves in and out of Christianity, Roman Catholicism, Buddhism, Shintoism, and Hinduism. There is a church in my hometown that exemplifies this to a T. The church Within also adds Mormonism, Native American religion, and some aspects of Wicca. In my way of thinking the golden thread sounds more like opening Pandora’s Box. I’m surprised that Islam is not mentioned in new thought? How can you have a union of ideas with philosophies so different from one another? With new thoughts there are many Avenues to Eternity whereas the Bible says in John 14:6, Jesus is the way, the truth, and the life. No one comes to the father except through him. Nobody! Thus. The golden thread has been severed forever by our Lord and Savior Jesus Christ.

WICCA likes to say that they don’t practice black witchcraft only white witchcraft. Witchcraft is witchcraft weather white or black. The Bible makes no distinction between the two. Witchcraft in the Bible carries the death penalty with it in the Old Testament. A consulted with familiar spirits is also forbidden by scripture. Fortune telling and crystal balls fall into this category. We are not doing be involved i we are not to be involved in necromancy which is contact with the Dead. The Mormons in their baptism of the Dead practice necromancy. We are not the cast spells and mess around with omens. Deuteronomy 18 covers the whole gamut of spiritism and it is to be avoided. WICCA will try to sugar coat their practices but they are forbidden by scripture. And that is good enough for me.

This is the new method of reaching people. They have an Interfaith service. Chrislam was born in this manner as a merger of Christians, Jews, and Muslims. It’s Wicca’s turn at the bat now with a Interfaith service with Christians. But what commonalities do the two have?None! Wicca is involved with nature and Magic. Nature worship is also practiced by Native Americans. Indians use peyote which is a drug that induces visions. Wiccans use magical potions along with the worship of nature in their rituals. 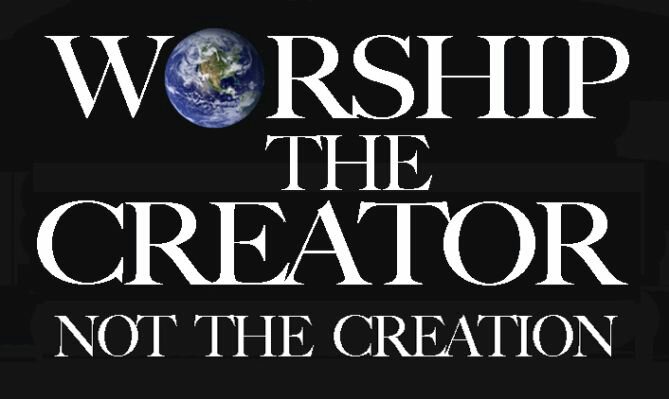 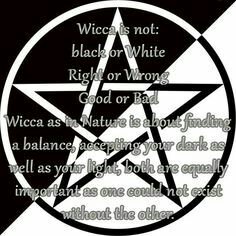 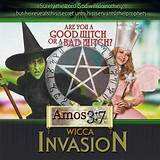 There are two classifications of Wiccans, black and white. White witches are more or less harmless but black witches use the occult and demonic forces in their practice including blood sacrifices of animals and even humans on occasion. White witches still use Magic by way of things like crystal balls and tarot cards. White witches blend well into the New Age movement. They believe Crystals protect them from harm much like the Mormons believe that magic underwear does the same thing. Do you realize that it public school Wiccans have books about casting spells that elementary students can read. That is allowed in their Library while the Bible is not.

Christianity and Wicca have nothing in common. 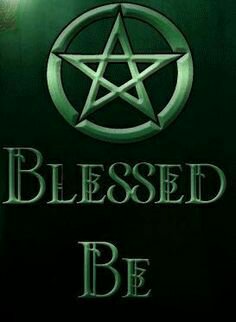 How is Wicca infiltrating the church? They’ve already been there for years. You just hear about them through other definitions. 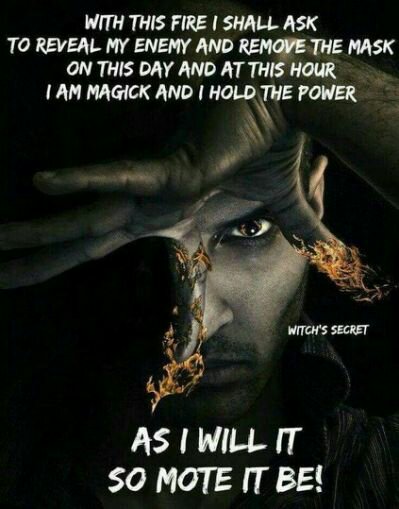 What other church can you think of that speaks things into existence? Have you ever heard of name it / claim it? You hear that expression all the time from Benny Hinn and other Pentecostal preachers. It’s almost like casting a spell and believing you achieve it. Do you know what the word is for speaking things into existence? It’s called abracadabra for that is what that means. I personally call those kinds of churches Abracadabra Churches.

Are you a member of the Diocese of Hocus Pocus? You may very well be without even knowing it and that’s how good of a job Wicca has done in camouflaging their presence in the church. I will go into that in more detail in part 2.