Without an interpreter? Is that required? 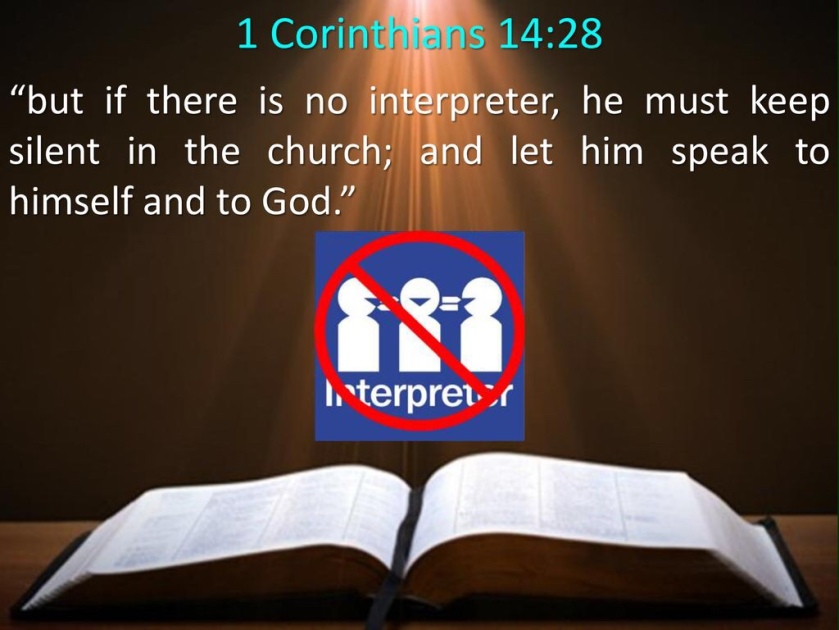 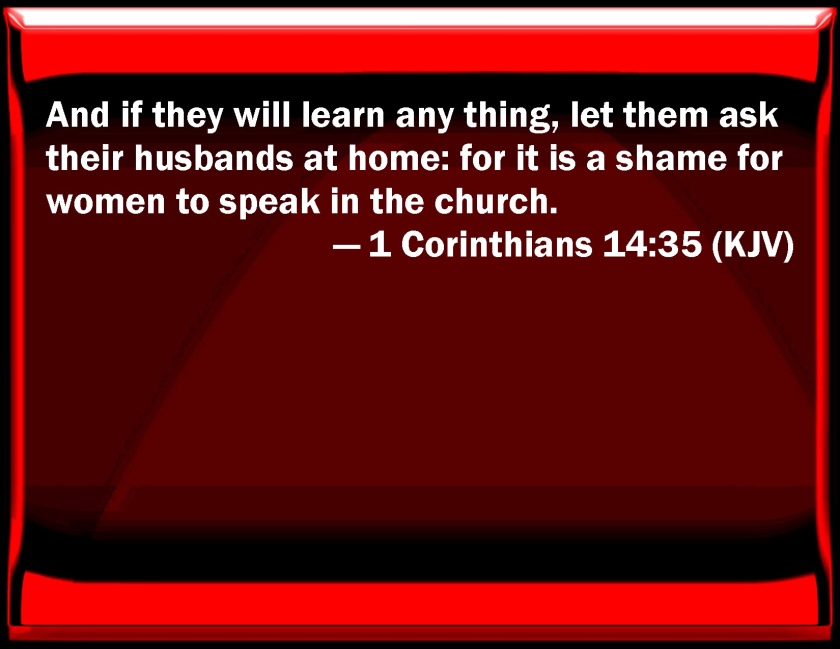 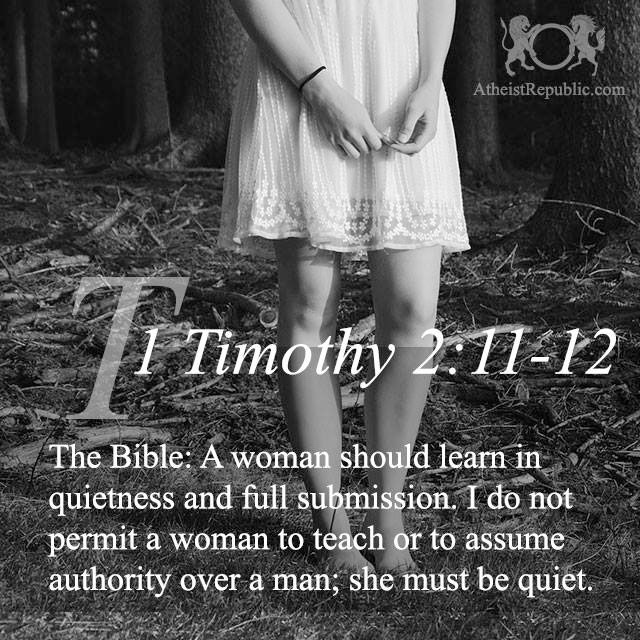 Most tongue speaking today is for show, is gibberish, and done by women with no interpreter. Without an interpreter, tongues are not to used. The church is not edified 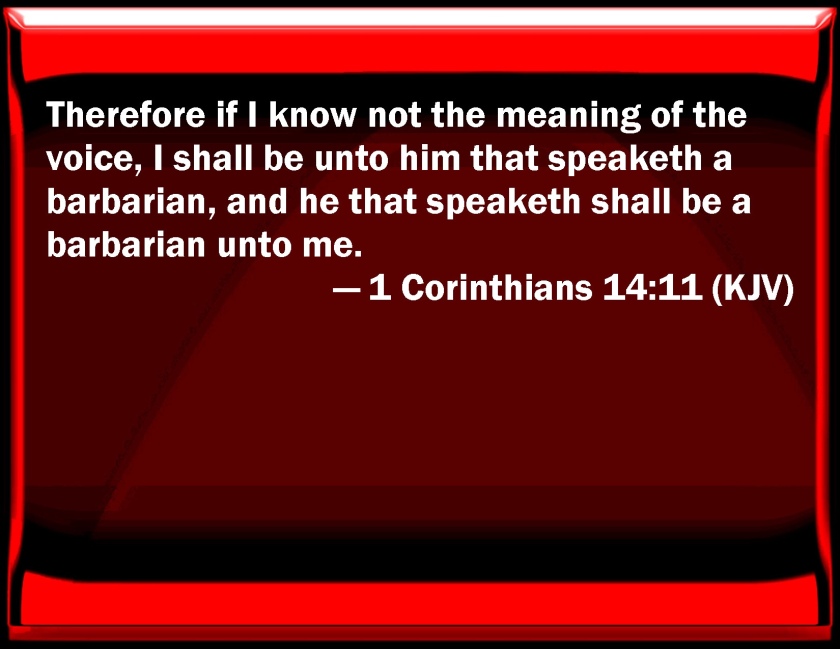 God is not the author of confusion so please let everything be done decently and in order. Praise the Lord! 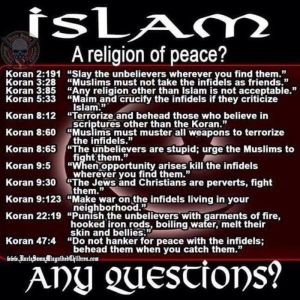 How in God’s name can Christians and Jews coexist with Islam when they believe this? They’re just dying to get in. Pope Benedict must have a screw loose to endorse this group. I already know Rick Warren does. I call Warren King compromise. Here’s another oxymoron for you. What was Ravi Zacharias doing endorsing Joyce Meyer? What was David Jeremiah doing on the Jim Bakker Show? These are all oxymorons and I stress the last part of that word for Christians that should know better. 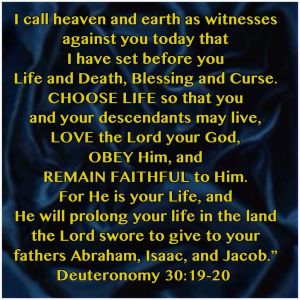 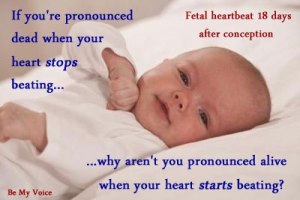 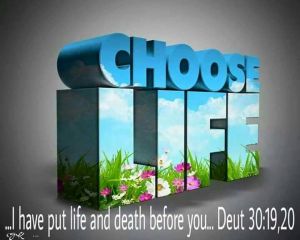 This is my last oxymoron in this series. It is targeted to those Christians that are pro-choice. That is the ultimate oxymoron. Instead choose life! 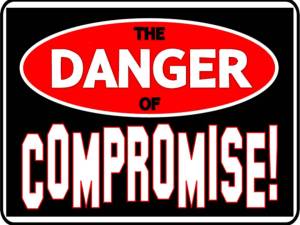 There is either truth or error. Some in the church believe there is something called fence-sitting. That might well be called compromise. It is the lukewarm position which God has said he would spew out of his mouth. 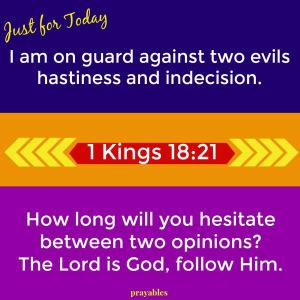 God or Baal? God or Satan? Christ or Belial? Two choices! Heaven or Hell? Life or death? Blessing or cursing? I see only two choices in all of this. There is no middle ground. It would seem though that mankind has created a middle ground. Kind of like a safe Zone. Or even an imaginary one? I think having two choices is much easier on all of us. So why do we compromise? Earlier today I mentioned that Ravi Zacharias appeared on Joyce Meyers TV show and endorsed her as a solid Christian. Why did he do this when he should know much better? He did the same thing with Mormons a few years ago. Bobby Schuller recently endorsed Jesse Duplantis. Dr. David Jeremiah recently appeared on Jim Bakker’s show which I thought would never happen. Ravi.Zacharias and David Jeremiah should know better then to compromise their faith to promote their books. I just don’t understand this? The only other explanation is that we are in the lukewarm Church position now. If so all hell will be breaking loose soon. Hang on for it will be a rough ride. But then, hasn’t God’s word said this would happen? The falling away comes first before the man of sin is revealed. Yes, most definitely hang on!